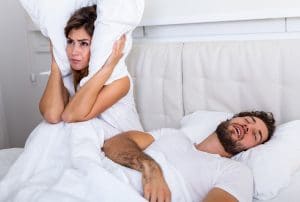 For many people, snoring is the kind of thing that’s easy to overlook. Either it doesn’t really occur that often, or it isn’t such an annoyance as to cause problems for the snorer’s sleeping partner. However, even when snoring does become annoying, many people who experience it don’t realize that the problems it can cause may have a lasting influence on their wellbeing. Today, we examine why snoring too much can be more detrimental than you realize, and the underlying sleep disorder that often hides behind chronic snoring.

Sometimes, it can be easy to underestimate the significance of snoring when you don’t fully understand what it means. For many chronic snorers, it’s the result of a blockage in their airway, which makes their breathing louder and more forceful. The severity of this obstruction differs, and it can determine just how loudly and how frequently you snore. However, if it occurs frequently, then your snoring habit could mean you’re receiving less oxygen (and working harder for it) than usual when you sleep.

When snoring is more than what it seems

By itself, chronic snoring can become problematic to your sleep and breathing quality, and in severe cases, your long-term cardiovascular health. However, for many people, snoring isn’t an isolated habit, but rather a symptom of a more complex sleep disorder, such as obstructive sleep apnea. If you suffer from sleep apnea, the obstruction in your airway grows increasingly more severe until it completely stops you from breathing. This results in increasingly louder snoring, then silence, and then a repeat of the same cycle when you start breathing again. Because it completely interrupts your breathing and sleeping patterns, obstructive sleep apnea can have a much more significant impact on your overall health and wellbeing.

Why snoring and sleep apnea can be easy to ignore

Whether it’s a chronic snoring habit or a case of obstructive sleep apnea, the condition can be easy to ignore because it typically won’t force you consciously awake at night. For instance, during a sleep apnea episode, your brain and body will automatically react to the lack of oxygen by waking just enough to clear the airway. Yet, you won’t be conscious of the episode, and may believe you’re sleeping soundly throughout the entire night. Over time, though, the chronic lack of deep sleep can cause you to experience symptoms of sleep deprivation, such as frequent tiredness and exhaustion during the day, difficulty concentrating, mood swings, and more.

Seek a solution to stop snoring

If you snore often enough, it could start to have a significant influence on your sleep quality, as well as your overall health and wellbeing. To learn more about how we can help you stop snoring, contact our office by calling Syosset Dental in Syosset, NY, today at 516-433-2211 or 516-921-6930.