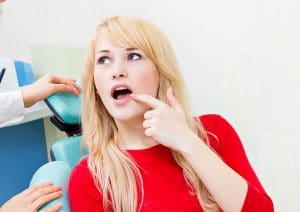 Taking good care of your smile is often simple, but requires careful attention and a high level of consistency. For example, it only takes a small slip in your dental hygiene routine for oral bacteria to cause harm to your teeth and/or gums. If they do, the earliest signs of trouble may not always be as obvious as you might expect them to be, and some symptoms can easily be mistaken as nothing to be concerned about. For example, many patients notice that their gums bleed on occasion, but a lack of other noticeable symptoms can make it seem like a minor issue.

When to check for bleeding gums

When gum disease develops, it starts with oral bacteria overwhelming and attacking your gum tissues. This leads to an infection known as gingivitis, which is the precursor to more severe gum disease and its variety of severe symptoms. At first, gingivitis can cause your gums to bleed slightly whenever they’re exposed to pressure. Most commonly, this is when you brush and floss your teeth, or when you eat certain types of foods. Check your saliva when you brush and floss for redness and signs of bleeding, and whenever possible, check your gums in the mirror immediately after eating.

What the bleeding actually means

Gingivitis is a progressive problem, and the extent to which your gums bleed can hint at just how severe it is. The bleeding is caused by the damage that the infection causes to your gum tissues, which also leads to a host of other increasingly worse symptoms as your gum disease progresses. For instance, gum inflammation and damage are also leading causes of tooth loss; in severe cases of gum disease, your gums and jawbone structure can become too weak to support all of your teeth. Because it’s progressive, your risks of experiencing this level of damage grow higher the longer it takes for you to recognize and address your bleeding gums.

What to do about it (and soon)

If you do notice bleeding in your gums, or if your dentist spots it during your routine checkup and cleaning appointment, then the best thing to do is to have it treated as soon as possible. In many cases, this involves a deep (periodontal) cleaning that includes carefully removing bacteria from underneath your gums. If your gum disease is severe, then you might also require expert care and maintenance from a periodontal specialist and/or a custom solution to replace one or more lost teeth.

Find out what your bleeding gums mean

Bleeding gums are most often a sign of developing gum disease, which could lead to serious troubles for your oral health if it isn’t addressed soon enough. For more information, schedule a visit by calling Syosset Dental in Syosset, NY, today at 516-433-2211 or 516-921-6930.