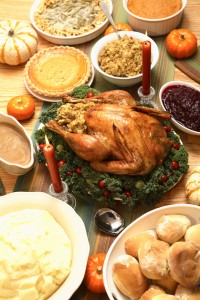 As children, few spontaneous outbursts could bring us as much joy as a massive impromptu food fight. Plastering a handful of mashed potatoes on your best friend’s face is a form of bonding unmatched by more conventional methods. Typically, however, childhood food fights rarely went unpunished, and cleaning the aftermath was nowhere near as fun. Although most of us have outgrown our food-fighting days, most of us do not realize that there is another food fight going on in our mouths every day. Our meals are harmless, for the most part, but like children scooping up piles of fries and other sorts of food, there are little microorganisms in your mouth that turn harmless nutrition into dangerous weapons. Syosset dentist Dr. Richard Kobak explains how oral bacteria turn your food against your teeth, and why your teeth need extra protection during the Thanksgiving feast.

From Food to Tooth Decay

Natural food is not intended to rot your teeth, and contrary to popular belief, oral health issues, like tooth decay and gum disease, are not natural, inevitable occurrences. Tooth decay, for instance, occurs when oral bacteria convert sugar and carbs into acid, which erodes your tooth enamel and renders your tooth defenseless against bacteria and decay. Your mouth’s defenses (i.e., tooth enamel and saliva) should be enough to neutralize this acid production, maintaining a healthy and balanced oral atmosphere. However, when we began refining sugar, we changed the equation. Oral bacteria developed an insatiable appetite for refined sugar and began producing acids from its consumption at a rate much faster than our mouths could neutralize. Hence the myth that sugar causes tooth decay. Some foods are naturally acidic, and consuming them adds to the already-considerable dangers of excessive bacterial acid production.

The Battle of Thanksgiving

As you gather around the Thanksgiving table this year, gaze at the delicious dishes laid across and around the table and see what awaits your oral health. Luckily, not everything on the table is your teeth’s mortal enemy. Cheese is an excellent snack for your teeth because it coats them in calcium, which your enamel needs to remain strong against attack. Chocolate contains an abundance of antioxidants that help reduce inflammation (which helps fight gum disease) as well as inhibit unwanted bacteria. Some experts are also studying the benefits of the cranberry to your teeth. Researchers at the University of Rochester have discovered that the popular Thanksgiving fruit contains compounds that inhibit acid-producing bacteria’s ability to form plaque, making it weak, defenseless, and largely ineffective at decaying your teeth.

We’ll Clean Up the Aftermath

Although you know you should take extra care of your teeth, it is Thanksgiving, and most people’s minds will be on the football game and feast that await them rather than the health of their teeth. If you find your teeth in need of professional attention or repair after the holiday, or if you’d like to speak with your Syosset dentist, schedule an appointment with Dr. Kobak by calling our Syosset dental office at (516) 433-2211. We welcome patients from Long Island, Nassau, Suffolk, and the surrounding New York City neighborhoods.