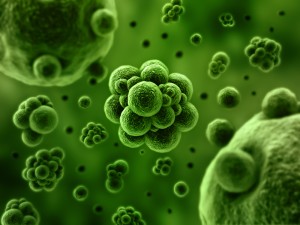 Right now, there are more bacteria in your mouth than there are people on Earth (10-50 billion compared to six billion). That number may seem staggering when you consider that some bacteria cause tooth decay and gum disease. However, out of the up to 600 different species of bacteria in your mouth, only a few are harmful. The majority are good bacteria that fight disease and infection. Two types of bad oral bacteria deserve special consideration. Streptococcus mutans is responsible for tooth decay. Porphyromonas gingivalis is the suspected main culprit in the link between gum disease and chronic inflammatory diseases, such as diabetes, Alzheimer’s disease, and cardiovascular disease.  Syosset dentist Dr. Richard Kobak takes a moment to explore these notorious microbes and share with you information about how they affect your oral and overall health.

Scientists believe that for thousands of years, the bacterium Streptococcus mutans lived harmoniously within the mouths of humans. As we began to refine sugars before consuming them, the S. mutans bacteria evolved to digest this new substance. The by-product of this digestion is lactic acid, which attacks protective tooth enamel and drains teeth of essential minerals (this process is called “demineralization”). The best protection against acid attacks is to brush and floss your teeth thoroughly at least twice a day. This will remove food debris and plaque before their bacteria have a chance to damage your teeth. Also, attend a comprehensive dental exam at least twice a year to allow Dr. Kobak to evaluate your oral health and spot signs of trouble early.

The connection between your oral health and your physical health is well known. The oral-systemic connection describes the relationship between gum disease and several systemic diseases. Scientists have long believed that infectious bacteria introduced into the bloodstream through the mouth were to blame. Further study has lead scientists to suspect that the true relationship between oral and systemic illness lies in the body’s inflammation response to the bacterium Porphyromonas gingivalis. The key indicator of P. gingivalis infection in the mouth is inflammation of the gums. Swollen and irritated gums have a higher risk of developing gum disease, or gingivitis. After gingivitis has set in, bacteria from the mouth can enter into the bloodstream through infected, bleeding gum tissue. When P. gingivalis enters the bloodstream, it can evoke an inflammatory response in almost any part of the body through which it travels. For instance, scientists have demonstrated that P. gingivalis accelerates inflammation in the arteries, which leads to atherosclerosis (hardening of the arteries) and heart disease.

You cannot rid your mouth of harmful bacteria, but you can protect yourself against it. Maintain a healthy oral hygiene routine, including brushing and flossing twice daily and attending dental checkups as recommended by Dr. Kobak, to reduce your risk of bacterial infection, tooth decay, and gum disease. To learn more about protecting your oral and overall health, schedule a consultation with Dr. Kobak by calling our Syosset dental office at (516) 433-2211. We welcome patients from Long Island, Nassau, Suffolk, and the surrounding New York City neighborhoods.